PLEASE NOTE: The times on this page are our standard Mass times. Please check our bulletin for changes to these times and special Masses.

The Parish of Singleton was founded in 1846, just 10 years after the town of Singleton was subdivided. It is one of the oldest parishes in the Maitland-Newcastle Diocese. Many of the Upper Hunter Parishes derive their origin from the Parish of Singleton. The Singleton Congregation of the Sisters of Mercy established their first convent (later to be the Congregational Headquarters) and St Catherine’s Secondary School here. The Redemptorist Fathers also established themselves here before moving to Mayfield.

The Church of St Patrick in Queen Street owes it’s foundation to the Irish Priest John Rigney who on the 23 July 1848 opened subscriptions for “Erecting a New Church and Priests Cottage on the Catholic Church Land at Singleton”. The new church was to replace the wooden structure of St Augustine which had served the Catholic population of Singleton and the surrounding area form 1845.

Archbishop Polding of Sydney laid the foundation stone for the new church on 31 March 1859 and within 10 months the Archbishop returned to officially open and consecrate the new church on 12 February 1860. The final construction was however, somewhat less than Munro design, with the nave only being built. In 1875 a gallery was added during the ministry of Father Fontaine whilst in 1881 the church was extended by the addition of a chancel or sanctuary, a sacristy and an oratory for the use of the Sisters of Mercy.

In 1894 to accommodate the growing convent population, the seating capacity of the oratory was extended, a southern entrance added and a large circular stained glass window portraying the Virgin and Child was installed. Finally in 1920-21 the two western towers were added to the church under direction of Monsignor Peter Meagher as a memorial to those Catholics of the parish who had died in World War 1.

Other churches in the Parish are St Paul’s at Glendonbrook and The Church of The Immaculate Conception in Broke. 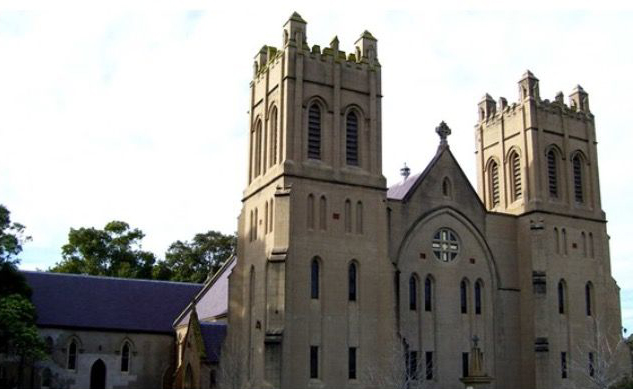